“If You Don’t Reprogram Your Mind For Wealth, You’ll Probably Stay Broke Forever…”

How Your Subconscious Mind Is Keeping You Stuck In Debt and Financially Crippled FOR LIFE! And How To Reprogram it For Financial Freedom…

From: Bruce Muzik
Location: Cabarete, Caribbean
RE: Getting Wealthy Once And For All…

If you answered YES to any of these questions, you’re not the only one.

Chances are, if you’re like most people, you’re feeling like a hamster on a wheel, repeating your past patterns with money, and feeling more and more frustrated and despondent because you can’t seem to change your financial situation no matter what you try. Well, help is at hand.

Until a few years ago, I was completely blind to my why I just couldn’t seem to hit the BIG time financially. Nothing I tried worked for long and I was spending a lot of time worrying about making enough money and how I was going to pay my mortgage, get out of debt and eventually create a life where I was financially free.

I was fed up with feeling stressed out about money, so I began studying everything I could get my hands on about how to create financial freedom. I heard the same message being taught over and over again…

“Financial success or failure begins in the mind”

I began examining my beliefs about money, wealth and achieving personal success and it was then that I realized that…

I’d been conditioned to make
just enough money to survive;
not to make excess millions!

And you’ve almost certainly been conditioned too… perhaps not with the same beliefs that I had, but with beliefs that currently keep you financially spinning your wheels, stuck in the mud…

You see, if you’re like most people, you probably learned about money from your parents, teachers and friends, whether directly or indirectly. They probably weren’t wealthy themselves, and you subconsciously inherited their limiting beliefs around money…

Still not sure you believe me?

Why do 50% of lottery winners
lose everything within
only TWO years?

That’s a pretty scary statistic. I’m sure you’re thinking, “If I won the lottery, I wouldn’t lose it!” But, according to these statistics, the chances are VERY HIGH that you would.

Why? Because most of the world have been conditioned to subconsciously believe that we don’t deserve great wealth, or that we’re not the kind of person worthy of money, or any of the many other numerous non-supportive beliefs about money. It’s these subconscious beliefs, the ones we’re not even aware of, that sabotage your wealth creation efforts before you have even left the starting gate.

WHY THE RICH GET RICHER AND
THE POOR GET POORER…

The thing that ALL billionaires have in common is very SPECIFIC BELIEFS about themselves and about money. It’s these beliefs and supportive thoughts that drive wealthy people to TAKE the ACTION necessary to ensure their financial success. As a result, the rich keep getting richer.

On the other hand, poor people think ‘poor thoughts’ and by the same mechanism, the poor don’t do what they need to do to get rich – so they stay poor.

Unfortunately, most of us inherited our money beliefs without consciously choosing them, so if you’re struggling with money in some way, you can be sure that the problem lies with the beliefs you inherited about money.

These are just some of 100’s of limiting beliefs that totally oppose wealth creation. Let’s look at how they work against you.

For example, perhaps you subconsciously grew up learning that “rich people are greedy crooks” and perhaps, as a child, when you saw someone driving a fancy car, your parents would make a negative comment about the rich driver. In this case, no matter what you try, your subconscious mind is going to make sure that you stay poor because it wants to protect you from becoming a greedy rich crook! See how simple it is?

Once I realized that changing my BELIEFS about myself and about money was the MOST important thing I could learn, I began researching everything I could find on how to change my beliefs and reprogram my mind.

After spending tens of thousands of dollars on courses, the one thing that made the most difference for me was a belief change CD that one of my teachers made for me.

After listening to this CD for just minutes a day, my financial life began to change quickly. My business took off like a rocket, my self esteem returned and opportunities to make money started popping up everywhere. I felt like a man in a desert who had just found water…

In the year after I listened to that CD, I earned more money than I had earned during my entire lifetime… With my old beliefs removed and my new beliefs firmly rooted, I began doing things differently and of course, I got very different results – miraculous ones!

I was so excited by the power of this CD, that I began making my own for other areas of my life. Over the course of a few years and making hundreds of these CD’s for my friends and clients, I figured it was time to let the rest of the world in on this ‘secret’ I had stumbled upon so that everyone can benefit from this amazing mind programming technology.

After two years of trial and error, I have created a CD, even more powerful than my teacher’s CD, and that’s what I’d like to share with you here.

INTRODUCING…
The Relaxation For Wealth Re-programmer

Here’s what it does: 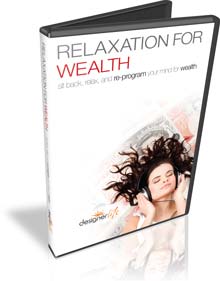 PROGRAM YOUR MIND FOR WEALTH

Here are some of the exciting things that you can look forward to after repeated listening to the Relaxation For Wealth:

I think you get the picture…

If you’re already a millionaire and your wealth just keeps increasing, then you probably don’t need this mp3. However, if you’re still struggling to make enough to live your dream lifestyle, or if you’re still in debt, or if you’re ready to permanently end the repetitive cycle of repeating your past patterns around money, then the Relaxation For Wealth is perfect for you.

Here’s the best part – it only takes minutes a day. Let’s face it, we’re all busy and time is the ONE commodity we cannot get back once we’ve spent it. The Relaxation For Wealth will take you just minutes a day to listen to and will set you up for success each and every day.

When I was a music producer, I wrote and recorded a #1 hit song, so I know a thing or two about audio production. Here’s what I did to make the Relaxation For Wealth really special:

PROGRAM YOUR MIND FOR WEALTH

Bonus: HOW TO STAY MOTIVATED

by Bruce Muzik and Brian Walsh 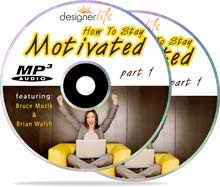 What do you do when you’re not feeling motivated to achieve your goals?

You follow the advice of this double mp3 program and you’ll be back on track, feeling fantastic again in minutes.

This TWO part program is jam packed with:

You’ll want to take notes listening to this!

How To Stay Motivated normally sells for $47. It’s yours for FREE if you ORDER NOW.

OK, So How Much Does It Cost?

Lets face it – if, you want to buy the Relaxation For Wealth, you’re probably facing some money issues, so I’m not going to charge you an arm and a leg for it.

To put the price in perspective, I’ll ask you this…

How much money have your old belief systems around money cost you over your lifetime? $100,000? $1million? Over the last 10 years you’ve probably missed opportunities, lost deals, not asked for what you want etc etc… If you add up the missed opportunities alone, I’m sure you’ll agree that you’ve lost BIG money from your old limiting money programs.

Perhaps more importantly, how much time have you wasted procrastinating, because your beliefs or Self Esteem have prevented you from taking action. You can’t buy that time back, but you can reprogram your mind to make your financial future very different from your past…

So, I’ve decided to keep this product ridiculously affordable, so the people who need it most can use it.

In a few minutes from now, you too can be reprogramming your mind for wealth for just $67. That’s it! So get yours now by clicking the order button below before I change my mind.

PROGRAM YOUR MIND FOR WEALTH FOR ONLY $67

Get Instant Access To Your Relaxation For Wealth Now 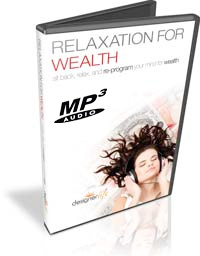 YES Bruce, I want in! Please let me have a copy of your “Relaxation For Wealth” audio download and my free bonus for just $67.

Have your credit card handy and click the orange “Add To Cart” button below to access your “Relaxation For Wealth” immediately.

Add to Cart: Relaxation For Wealth

Please note: Your Relaxation For Wealth audio .mp3 will be available for you to download instantly just TWO clicks away.

You are protected by my 100% money back guarantee.

It is incredibly important to me that you feel thoroughly delighted with your purchase of the Relaxation For Wealth audio mp3. I am completely confident that you will be, so let me remove any doubt from your mind…

If you’re not happy, I don’t want or expect to keep your money (in fact I’d be embarrassed to keep it!) All you need to do is drop me an e-mail within 90 days of purchase and I’ll happily refund your money in full. The Relaxation For Wealth audio recording remains yours to keep as a ‘thank you’ gift from me!

So you really can’t lose. The recording is yours no matter what!

Warning: The Cost Of Not Using This Program

If you don’t re-program your subconscious mind, you’re guaranteed to go back to your old limiting money patterns, and we all know where those lead – ordering from the right hand side of the menu, and the feelings of worry and frustration that go hand in hand with not having enough money! Worse still, you might have gotten into debt or be at risk of having your house repossessed…

On the other hand, when your subconscious mind is programmed for wealth, you can relax, knowing that you’re actively moving forward towards wealth, increasing your income each month and then you can take that holiday you’ve been dreaming of…

So the choice is yours…

I wish you all the financial success that you deserve.

Your partner in success,

P. S. If you’re struggling with money in any way, you definitely have limiting subconscious beliefs around money. Unfortunately, its predictable that financial freedom will keep eluding you until you uproot your limiting beliefs and implant some new ones that support you creating wealth. The Relaxation For Wealth is designed to do this in only minutes a day. Order now and you’ll also receive your amazing bonus FREE.

P.P.S. Sadly, most people go through life missing out on all the opportunities to create massive wealth, which are right in front of them, because their minds are programmed to show them only opportunities for hard work, struggle and middle income. I don’t want that to be you. Trying to create wealth without first having the right mindset is like trying to build a house without foundations. It just doesn’t work, so make sure you order your Relaxation For Wealth now.