I’ve spent the last 3 days studying the results of a Law Of Attraction survey I conducted recently. One of the questions I was asked the most often was “How do I speed up the process of getting what I want using the Law Of Attraction?”

After receiving this question at least 20 times, I began looking for an answer…

What is the secret? Is it…

Of course, all these things are beneficial, but I was searching for the ONE single thing that makes the BIGGEST difference – the high leverage action…

So, What Do All The Golden Times Have In Common?

Yip, as counter-intuitive as it sounds, the times when I experienced the most synchronicity and magic were the same times when I was creating the most SUCCESS in my life.

Ever heard, “Success breeds its own success” or “The rich get richer while the poor get poorer”?

The More Success You Generate, The FASTER and More Powerfully You’ll Experience the Law Of Attraction In Your Life.

I had a direct experience of momentum last month. 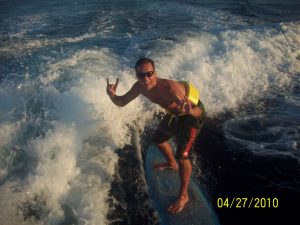 A friend of mine invited me to go wake-surfing. Wake-surfing is when you take a surfboard and you surf on the actual wake of a large boat.

I noticed that as the boat gathered momentum, the wake grew bigger and bigger. Eventually, the momentum of the boat generated a wake that was big enough for me to surf without having to be towed along… It was a cool feeling being carried along by this powerful force!

Success with the Law Of Attraction works in a similar way. The more momentum you create, the more you get ‘carried’ along by the wave…

I first heard about “attraction momentum” from Roger James Hamilton in his must-read business book “Your Life Your Legacy”. He writes, “When we are living with momentum, small obstacles disappear… and attraction appears all around us… and sweeps us along.” (BTW, you can get the book free when you buy a Wealth Dynamics test through this link).

So if momentum is the catalyst for Attraction, then the million dollar question must be, “How can we all create unstoppable momentum in our lives?”

How to Create Unstoppable Momentum

Well, in my experience, creating momentum starts simply with taking some action.

The action you take must a) be sustained over a period of time (enough time to generate some momentum) and b) sustained in the “proper” direction.

Let’s dig a little deeper into these distinctions.

Imagine a candle… an innocent enough object. It provides us with light and warmth.

Now, imagine that this same candle is allowed to burn until it sets fire to a pile of logs… This little candle could be the beginning of a furnace that could cook you food and keep you warm for days… That is the power of sustained action in one direction.

You, my friend, have a candle in your hands that could light up the rest of your life if you allow it. Your candle is your ability to take action.

Are you allowing it to burn bright over time, or do you smother it at the first sign of stormy weather?

2. Action In The “Proper” Direction?

So how on earth are you supposed to know if you’re taking action in the “proper” direction anyways?

Obviously, I can’t know what the “proper” direction is for you, but I can share something I’ve learned from many years of traveling in the “wrong” direction.

The “proper” direction for you is most likely going to be discovered by you, not chosen by you.

I remember buying a ticket to a Landmark Education seminar (a personal development seminar) with the intention of finding out what was causing my depression at the time. 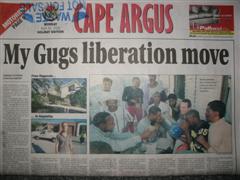 As a result of that seminar, I ended up moving into a ghetto in South Africa and living there for 6 months as the only white man for miles around. My ‘move’ was a life defining experience for me and had me plastered all over the front page of the newspaper.

So what is the trick for determining the appropriate action?

The trick is to continuously look for feedback from your actions. If something you are doing is not working, take note as to why, and then adjust what you are doing accordingly. Anything will usually work better than what is already not working.

Here’s a principle I have proved to be true for me time and time again:

If taking an action requires Big Balls (i.e. the thought of taking it  scares the crap out of me) and excites me at the same time, it’s usually the proper action for me to take.

So, we’ve covered a lot in a short space, so let’s sum it up and dumb it down.

Til next time, think BIG.

P.S. A great way to get yourself inspired to take ‘proper’ action is to program your mind with your goal. Find out how to do it here.

P.P.S. Your comments are welcomed and appreciated. I read them all…